Setting up a Chessboard Made Real Easy

Setting up a Chessboard Made Real Easy

Congratulations on deciding to start playing the great game of chess. Before you can win a game, you must know how to set up the chessboard properly.

Yes, chess is a complex game but setting up the chessboard is a simple matter and one you can quickly master. All it takes is a few minutes to get to know the chessboard and where the pieces go.

There is no need to concern yourself with how the pieces move at this time. Learning and playing chess is easier when you break it down into small tasks.

Surprisingly, Hollywood will pay a lot of attention to the clothes the actors wear and spend a lot of time getting action scenes right, but will often position the chessboard incorrectly. 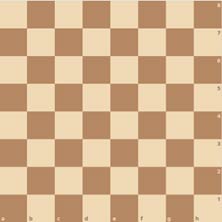 To position the board correctly, you must have a light square in the bottom right-hand corner.

Now that you have the chessboard positioned correctly, you will notice that the chessboard is a square comprised of eight by eight squares of alternating light and dark colors.

These 64 squares are divided equally into 32 light and 32 dark squares.

Giving Each of the Squares a Name

Navigating the chessboard and recording games is done with the aid of chess notation.

In chess, the ranks, which run across the board, are given numbers. Starting from the first rank, where the white pieces get set up, the ranks go from one to eight.

The files, or columns, are assigned a letter from a to h. The letters start from the first file on the left. Each square gets a unique letter, for the file and a number, for the rank. 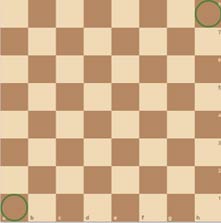 Along with ranks and files, a third essential element of the chessboard is the diagonal. Diagonals are made up of squares of the same color, unlike ranks which alternate colors.

That is why the bottom left-hand square for each side is dark. You will notice that both these squares are on the same diagonal.

This diagonal is one of two diagonals that players call a “long diagonal” on the chessboard. The other long diagonal connects the bottom right-hand squares for each side.

Chess players call these two diagonals long diagonals because they are the only diagonals with eight squares.

When naming a diagonal, you use the starting square and the square where it ends. The two long diagonals are the a1-h8 diagonal and the h1-a8 diagonal.

That is how you name them if you are playing with the white pieces. From the black side, they are called the a8-h1 diagonal and h8-a1 diagonal.

There Are Two Types of Pieces in Chess

The two types of pieces in chess are the heavy pieces and the minor pieces.

In chess, the rooks and queen are called heavy pieces.

The bishop and knight are called minor pieces.

Set up the Pieces From the Outside

On the outside, we have the rooks, which go on the a1 and h1 squares. The black rooks go on a8 and h8. 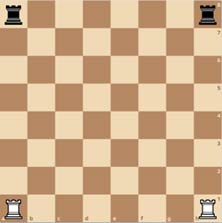 Next to the rooks, we place the knights on the b1 and g1 squares. 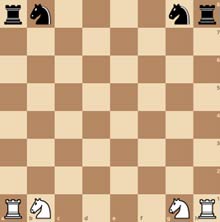 Now it is time to place the bishops on their starting squares, which are c1 and f1 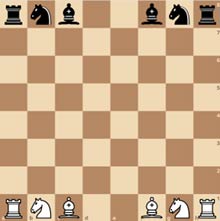 You get two each of these three pieces, and if it helps you remember, you can always make up a rhyme using “R” for rook, “K” for knight, and “B” for bishop.

What can we come up with using R, K, and B? Remember, we are going from the outside inward, so we need to do it in this order - rooks, knights, and bishops.

Maybe “Rosie Kisses Bullfrogs” would help us remember how to set up these three pieces?

Now it is time to place the queen and king on the board. They each go next to a bishop, but which one?

These squares are both in the d-file, and the queens go on d1 and d8. 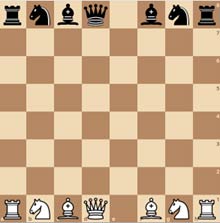 That only leaves one square for the king - e1 and e8. 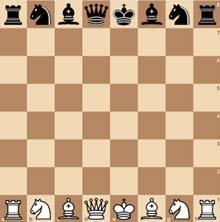 Now, all we need to do is add the pawns. If you think of the pawns as a protective wall shielding the other pieces, you can guess they go on the second rank.

Because there are eight pawns and eight files, you can place a pawn on each file of the second rank. 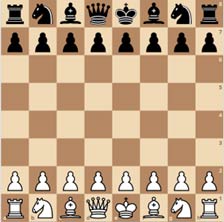 Congratulations on setting up the chessboard! You won’t need to do it many times before it only takes seconds to get ready for a game.

The two most important things to remember when you set up a chessboard are to first set the board with the light square in the right-hand corner.

Then you begin setting the pieces on the board from the outside in, starting with the three pieces that you get two of - rooks, bishops, and knights.

The only other thing to remember is to place the queen on a square of her color. That means the white queen goes on the light square and the black queen on a dark square.

Now that you have learned how to set up the chessboard, the next step is to learn how the pieces move. Like setting up a chessboard, this is easier than it looks.

by Shaun Sedice
Did you like this post?
0
Previous article: Take up the Powerful Closed Sicilian
Related posts