The third world chess champion, Jose Raul Capablanca, said, "If you want to improve your game, you must study the endgame before anything else." Rook endings are some of the most common endgames in chess, yet few have mastered them.

The fact that entire books are devoted to rook endings shows how complex these endgames can become. Fortunately, we can start by learning basic endgames and build on this foundation in chess.

Before moving on from the basic rook endgames, give yourself time to fully understand each endgame's principles. Unlike opening theory, which changes almost daily, these endgame principles will remain the same for as long as you play chess.

Rook Endgames in Chess: How to Draw

When you lose material in the middlegame, it is possible to secure the draw by transitioning to the endgame. However, you must ensure you can reach a position you can hold.

This strategy is only possible if you have spent time studying endgames in chess. There is little point in simplifying solely because you remember reading rook endgames are almost always a draw.

In a rook and pawn versus rook endgame, if the defender can get their king in front of the enemy pawn, the game is almost always a draw! 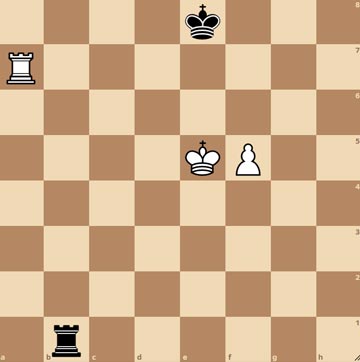 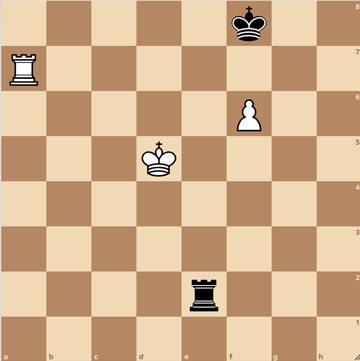 The white king can no longer return to defend the pawn, which means the rook will get tied down to protect the pawn.

Notice that Black retreated the rook to the first rank the moment White advanced the pawn. The rook checks from the first rank mean the white king cannot attack the black rook.

The moment the king tries to approach the black rook, it leaves the pawn open to attack.

After preventing the king from returning to the pawn, Black has drawn the game. Even if White manages to exchange rooks on e7 Black plays Ke8, it is a stalemate.

How to Win With a R+P versus R

Once the king and pawn advance to the sixth rank, if the defender has no immediate check, then the position is usually winning. Endgames in chess invariably require good technique, even in winning positions.

The defender can make it challenging for you, and the slightest misstep can cause you to settle for a draw. Even though the pawn is on the sixth rank, promoting it is not easy.

The key to promoting the pawn is to use all your pieces. Using the pawn as a shield and pushing it to the seventh rank is vital. 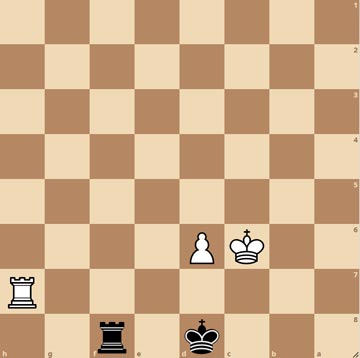 Even with Black to move, there is no way to save the game. There is no immediate check, and if the rook leaves the first rank, White wins with 1.Rh8+ Rf8 (only move) 2.Rxf8 checkmate!

A wise man once said one of the hardest things in chess was winning a won game. Here it requires a little finesse, but it is not too tricky. 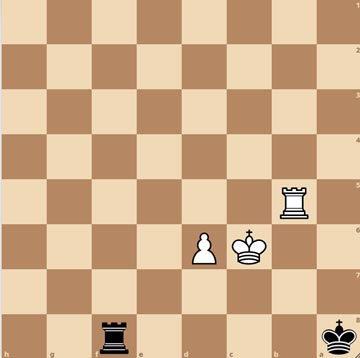 The rook prevents the black king from entering the game; on the fifth rank, it can act as a shield to block a check. White intends to advance the pawn to d7 and then shield it from attack with a king on e6.

Moving the rook to b4 or b3 would keep the black king stuck in the a-file, but the rook could not help block a check.

Keep your pieces in your opponent's half of the board whenever possible. 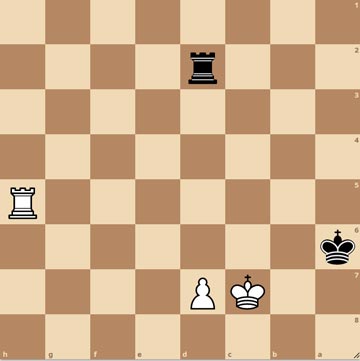 Once again, White keeps the rook in the fifth rank to act as a shield after the inevitable checks. The pawn has advanced and is only one square from promoting.

There are two rules to remember when defending against rook and pawn:

Knowing these endgame rules helps you find the correct moves and get your pieces into position to defend. This information is helpful if you are trying to win the position because you will know what the defender needs to do to stop you.

Look at this instructive game and learn that even the best players in the world do not play the endgame perfectly. You will also see a familiar technique in the rook and pawn endgame.

The Lucena position is one of the classical theoretical endgames in chess. The technique used to win is called bridge building and involves blocking checks with your rook.

There are some essential points to remember when building your bridge.

Here is an example of building a bridge. 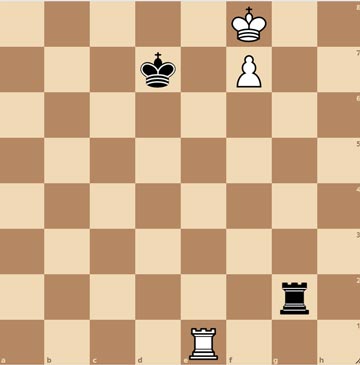 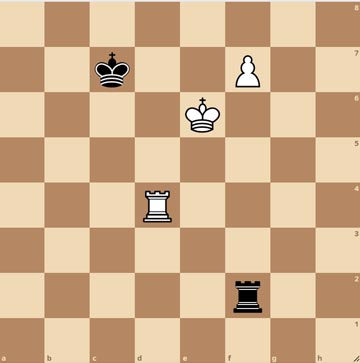 Remember, only advance towards your rook when entering from a file next to the pawn. In this example, these would be the e and f files.

After 5.Ke6! Re2+ 6.Kf5 Rf2+ 7.Rf4 White has successfully built a bridge, and the black king cannot prevent the pawn from promoting after 7…Rxf4+ 8.Kxf4 because it is two squares from the pawn.

Here is an excellent game where White won by building a bridge.

How to Play With an Isolated King

When your opponent uses their rook to cut off your king, there are still defensive options open to you. As in most endgames, the more advanced the pawn, the fewer options you have available.

In rook and pawn versus a rook endgame, precise placement of your pieces is vital to a successful defense. One rank or square can prove the difference between a draw and a loss. 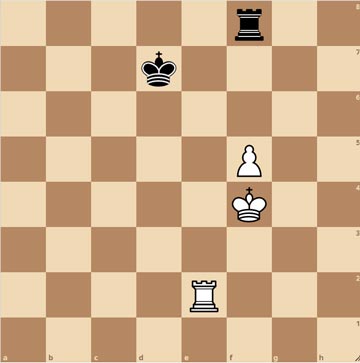 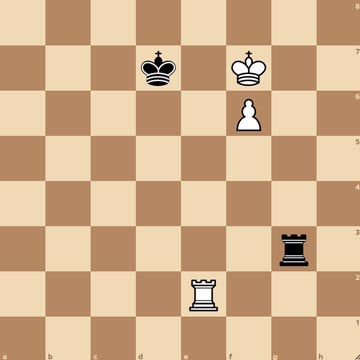 White will soon use the Lucena Position to win the game from here. The king will go to f8 and allow the pawn to advance to f7.

Once the pawn reaches f7, White will drive the enemy king two squares from the pawn, position the rook on the fourth rank and work the king back to the rook.

Remember to stay in touch with the pawn after 11.Kf6 Rf1+ and play 12.Ke6, not 12.Ke5. Do not rush to zag when you need to zig. Although this looks like a long sequence, it is more about technique than memorization.

For the most part, it doesn't matter how long it takes you to win the endgame as long as you get there in the end.

Interestingly enough, if it was Black's turn to move in the original position, the game ends in a draw after 1…Re8! Notice that if the black king were one square further forward, this defense would not be possible because the rook would be hanging.

Here is that original position

Black to move achieves a draw with 1…Re8! The king and pawn ending is a draw if the rooks get exchanged.

Defending With a Pawn on the Fourth Rank

If we move the pawn back and advance the black king a rank, the position is a draw no matter whose turn it is to move. Small nuances like this are what make endgames in chess such fun. 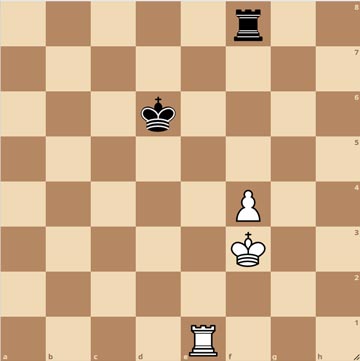 When defending, keeping your king in contact with your opponent's rook is vital. This contact prevents your opponent from advancing the pawn because it protects the rook.

Remember, if possible, your goal is to draw by getting your king in front of the pawn. 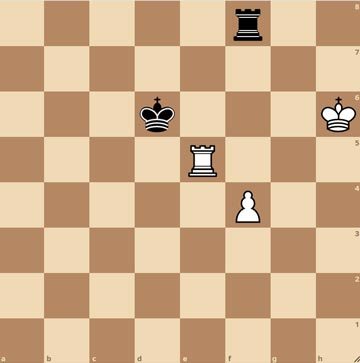 Notice how the black king keeps contact with the white rook. Do not meet 6.Re5+ with 6…Kc6 because this allows the white pawn to advance to the fifth rank.

In case you were wondering, in the starting position with the pawn on the fourth rank, Black can draw the game with 1…Rb8 or 1…Rh8, where there might follow 2.f5 Kd7 3.Kf4 Re8 4.Rxe8 Kxe8.

Endgames in chess offer a whole new world for you to explore. This world is a fascinating one with its unique beauty.

The best part of working hard on your endgames is that it remains the weakest part of many chess players' game. You won't need to wait long to reap the rewards from the time you put into learning endgames in chess.

Even if you do not imagine yourself as a 2700-rated chess player, you can take some satisfaction in learning the endgame better than many chess grandmasters. Go ahead, become a grandmaster of endgames in chess.

by Shaun Sedice
Did you like this post?
0
Previous article: Powerful Chess Gambits for Beginners to Try
Next article: Unleashing Your Queen and Rooks in Middlegames
Related posts

Unleashing Your Queen and Rooks in Middlegames

Pawn Endgame in Chess: Getting It Right!

Must-Know Endgames for Beginners: How to Checkmate
Related Products Unleashing Your Queen and Rooks in Middlegames

Pawn Endgame in Chess: Getting It Right!