Jose Raul Capablanca, the third World Chess Champion, said, “In order to improve your game, you must study the endgame before everything else.” Because of the fifty-move rule in chess, it is essential to know how to checkmate your opponent quickly in the endgame.

You also need to know how much material you or your opponent needs to deliver checkmate. This knowledge can help you transition to a drawn endgame even if you are material down.

For beginners, there are four basic checkmates for you to know:

You can also checkmate with a knight and bishop, but this is a highly challenging checkmate to deliver. A king and two knights can only checkmate if your opponent blunders.

These two checkmates are more likely to end in a draw because of the fifty-move rule. Begin by mastering the basic checkmates, and then learn the other two if you feel the need.

How to Checkmate With King and Queen

There are three steps to remember when learning how to checkmate with a king and queen versus a king.

Although it is more common to restrict the enemy king by controlling a rank with your queen, you can keep your opponent’s king trapped against the side of the board. For example, if the king is in the h-file, you will place your queen in the g-file and then bring your king over.

Even though the queen is mighty, she cannot deliver checkmate against a lone king on her own. The king will defend the queen as she gives a checkmate or blocks your opponent’s king from escaping.

Because the queen controls ranks, files, and diagonals, your opponent’s king cannot attack the queen because it would step in to check. This means the queen can reduce the box around the king on her own.

If your opponent’s king is on d6 and retreats to e6, you can reduce the box by playing Qc5. Do not play Qd5 because your queen will get captured, and the game is a draw. 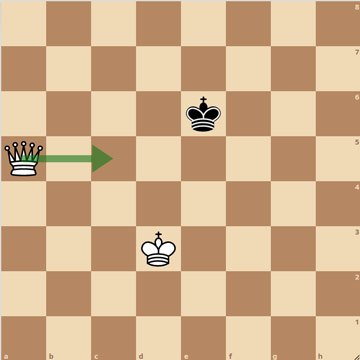 After Qc5, the black king is trapped inside a box that goes from c5-c8 and c5-h5. When reducing the box size, be very careful to give your opponent’s king an escape square to avoid a stalemate.

Here is how to deliver checkmate after Qc5. Black sets a trap with 4…Kd8 hoping White will play 5.Ke6 because this will be a stalemate.

How to Checkmate With King and Rook

Take a look at the final position in the example above. 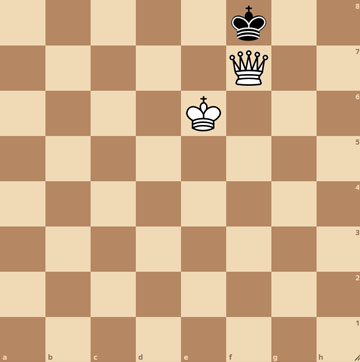 If you replaced the queen with a rook, it would not be checkmate. Rooks do not control diagonals, so the black king could escape to g8.

When you deliver checkmate with a rook and king, your king is used to prevent your opponent’s king from escaping check.

Your king’s role is different, but once again, you use your major piece to make the box smaller. Be alert in king and rook endgames to an attack on your rook by the enemy king.

The king can approach close enough to attack your rook, and if you are focused on bringing your king closer, you might blunder a piece.

Fortunately, your rook has a much longer range than a king. When your opponent’s king gets close to your rook, move it to the other side of the board.

As in the king and queen ending, you will not have trouble delivering checkmate within fifty moves with a king and rook.

Learning how to checkmate with a king and rook requires more patience, but it is not hard. 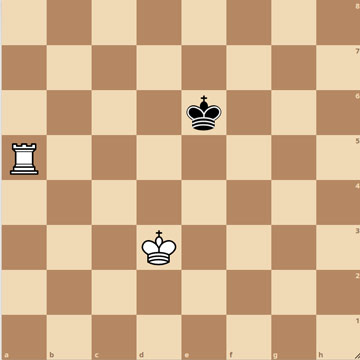 The rook cuts off the black king, so White begins by activating the king with 1.Kd4. In this position, you can deliver checkmate in eleven moves or less.

Keeping your rook and king close together is vital to your checkmate strategy.

This allows you to use the king to defend the rook. Black will try to make you move your rook so that it takes you longer to deliver a checkmate.

See if you can calculate how to checkmate the black king after 1.Kd4. Below is an example of one way to deliver checkmate.

When defending, remember to move your king outside the rook.

How to Checkmate With King and Two Rooks (or Two Queens)

The secret to delivering a checkmate with two rooks is to switch between the rooks when delivering checks. However, keep in mind your opponent’s king can attack your rooks.

Do not automatically alternate between rooks because one of your rooks could be attacked!

Yes, you can still deliver checkmate with a king and one rook, but why make it more difficult on yourself?

The two rooks combine nicely to force the king to the edge of the board and deliver a checkmate. 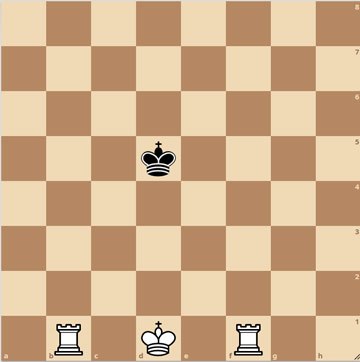 White starts by delivering check with Rf5+ and after …Kc6 plays a waiting move with Rh5. This move forces the king away from the c-file and allows the other rook to join the battle.

You do not need to activate your king when you have two rooks.

After 1.Rf5+, the black king might try to attack the rook with 1…Ke6. In this instance, the rook can go to h5 to draw the king further from the queenside rook.

You draw the black king far away from your rooks by going to h5 and then swinging across to a5. The king cannot get back to attack your rooks before you deliver checkmate.

Because the king cannot directly attack the queen, delivering a checkmate with two queens is even easier. There is no need to switch them from one side to the other.

Again, it is not necessary to activate the king.

Here is how to deliver checkmate with two queens.

Suppose we are starting from the same position; you can deliver checkmate with the queens in half as many moves as it takes with two rooks.

The black king only has two squares it can move to after 2.Qc6+ - e5 and e7. No matter where the king goes, White delivers a checkmate with the same move Qff6#.

How to Checkmate With King and Two Bishops

You cannot deliver checkmate with two bishops of the same color because the king is safe from attack on the other squares.

If both your bishops are on light squares, your opponent will keep his king on the dark squares.

When you have two bishops of opposite colors, they work together to keep the king from escaping the mating net.

Your king is needed to help restrict your opponent’s king and to defend your bishops.

Learning to checkmate with a king and two bishops will require lots of practice. Chess engines are very helpful and make excellent training partners.

The good thing about practicing checkmates with a chess engine is being able to switch colors if you forget how to checkmate.

You often need to take extra time in the endgame and play waiting moves. Delivering a checkmate with two bishops can take sixteen or more moves. 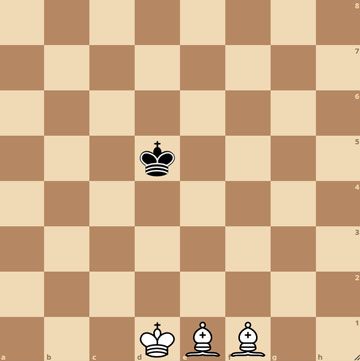 White begins by cutting off the king with 1.Bg3 and waits to see where the king goes. In response to 1…Ke6 White plays 2.Ke2, and if Black moves the king back to d5, White plays 3.Bh3.

Be very careful because after 15…Ka2 it is possible to blunder with 16.Ba4 stalemate! You can avoid this if you follow the forcing move method of finding moves.

When you use the forcing move method, you start by looking for checks. Then you will avoid 16.Ba4?? and play the correct 16.Bc4#

When it comes to learning how to checkmate in the endgame, chess engines are great. You can play the same position over and over without upsetting your training buddy.

The chess engine will show you the quickest way to deliver checkmate. Knowing how to checkmate in the fewest moves is vital in rapid or blitz games when you are low on time.

Learning how to checkmate is essential, or gaining a winning material advantage will not help you. You can also use this knowledge to make it more difficult for your opponent to checkmate you and play for a stalemate.

by Shaun Sedice
Did you like this post?
0
Previous article: Chess Computers Help You Reach Your Goals
Next article: 5 Strong Chess Engines and the Best Ways to Train With Them
Related Products WINNING CHESS THE EASY WAY - VOLUME 2 - Learn How to Create a Plan in the Opening, Middlegame and Endgame
$19.95